Since 1977, the Strauss Capelle Vienna has performed over 3,000 concerts worldwide, never failing to create memorable experiences for its treasured international audiences. Performing in their trademark red historical uniforms, remnants from the ensemble’s birth in the court of Emperor Franz Joseph I, the orchestra’s mission is to uphold the rich musical tradition of the Viennese Waltz, created by Vienna’s own Strauss Dynasty.

Though the ensemble does its best to create a modern perspective on the music it performs for today’s audiences, the Strauss Capelle remains firmly rooted in Austrian tradition and history, in order to preserve the Strauss Dynasty’s timeless musical legend. 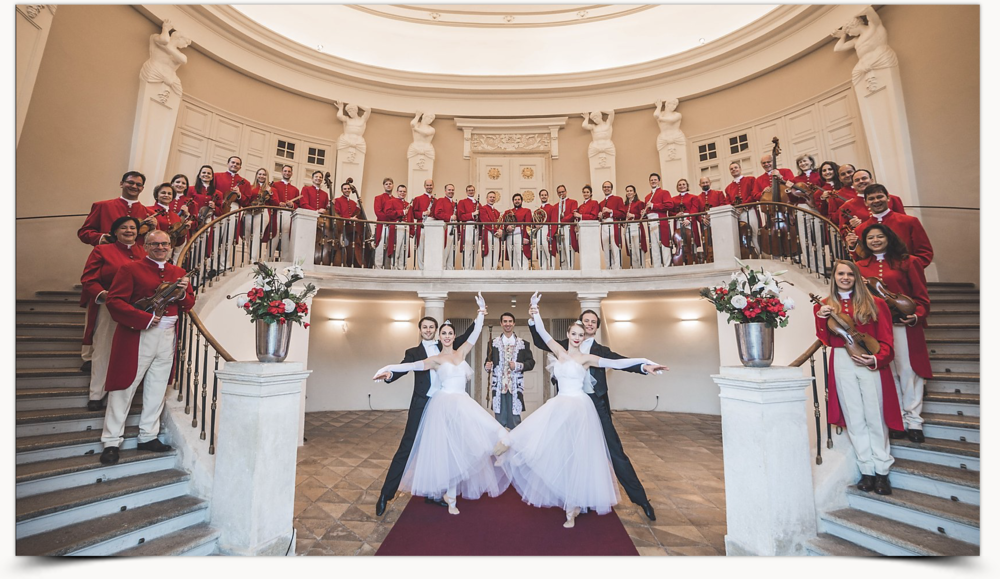 The Strauss Capelle Vienna, founded by Johann Strauss I in 1827, is steeped in historical tradition and is proud to be considered one of the most highly respected orchestras worldwide.
The Strauss Dynasty, including father Johann I and sons Johann II, Eduard and Josef, toured the world with their Strauss Capelle Vienna, heralding a new Golden Age of the Viennese Waltz and enchanting international audiences with breathtaking performances of the contemporary masterpieces of their day.

After a concert tour through Canada and the USA in 1901, Eduard Strauss I, son of Johann Strauss I, disbanded the orchestra in New York. 76 long years passed before members of the Vienna State Opera and Volksoper orchestra decided to revive the Strauss dynasty’s original orchestra. With an unwavering devotion to their musical heritage, these musicians brought Strauss’ music back to life in its original setting.

The rebirth of Strauss’ orchestra meant the Strauss family’s most enchanting melodies could once again fill the world’s concert houses. The orchestra today continues its founder’s tradition of performing Strauss’ music on tour to the highest standard, delighting audiences around the globe.

The Strauss Capelle Vienna wears a historical uniform which distinguishes it from all other orchestras and invites the audience on a reminiscent journey through time. These costumes represent the cultural tradition from which they stem, standing for musical precision and excellence.

Historical research demonstrates that our uniformed costumes were first created upon request by the Austrian Emperor Franz Joseph I, whose court tailor was instructed to design special costumes for the Emperor’s favorite musical ensemble: a diversion from its conventional black suits. This mark of excellence has since remained with the ensemble through the ages. 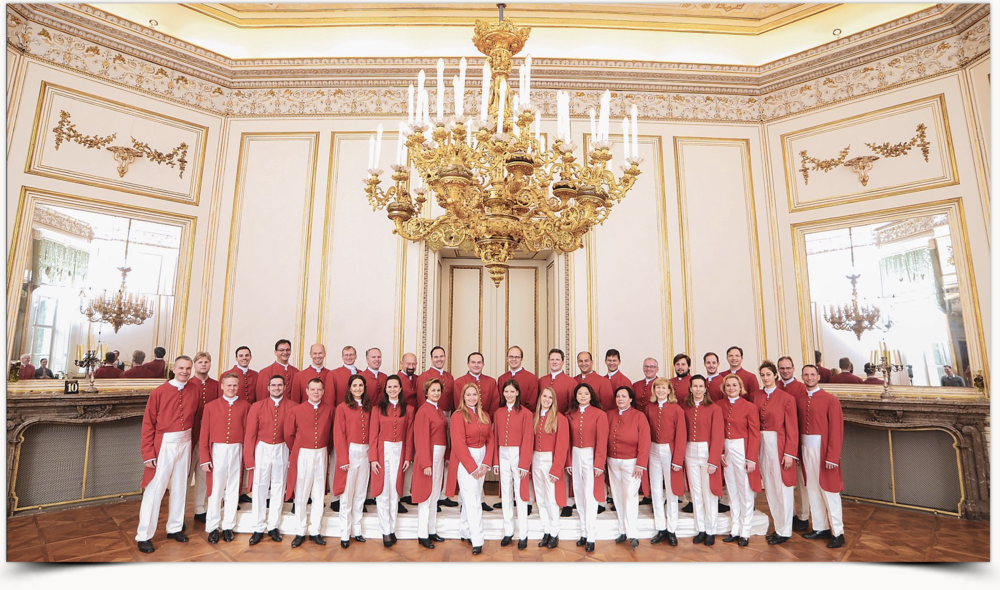 Rainer Roos studied piano with Prof. Ong and conducting with Prof. Ungar at the Stuttgart Music University. At the age of only 20, he received a fixed engagement at the Stuttgart State Opera. Later, he became assistant conductor at the Bayreuth Festival and led performances at the opera houses of Heidelberg, Magdeburg, Luxemburg, Baden nearby Vienna and Vienna. As a guest conductor, he co-operated with numerous European orchestras such as the WDR Broadcasting Orchestra, the Luxemburg Philharmonic, the Paris Chamber Orchestra, the North West German Philharmonicor the orchestra of the Vienna Volksoper.
In 2011, Rainer Roos was appointed chief conductor of one of the greatest traditional Vienna ensembles and musical ambassadors of the city of Vienna: the Strauss Capelle Vienna, founded by Johann Strauss I in 1827. An honorary member since 2016, he has conducted the orchestra all around the world amongst others in Vienna, Moscow, Shanghai, Beijing, Athens, Brasilia, Manaus, Seoul, Warsaw, Stuttgart, Sofia or Bogotá. Since the season 2014/15, he also holds the post of artistic director at the opera festival in Zwingenberg, Germany. Honouring his achievements in the realms of opera, he was awarded the Gottlob-Frick-Medal in 2018. In 2019, Rainer Roos was appointed “Honorary Artist of Foshan Grand Theatre“ (China) and became dedicatee of the “Maestro Waltz“ in appreciation of his merits for Viennese music. 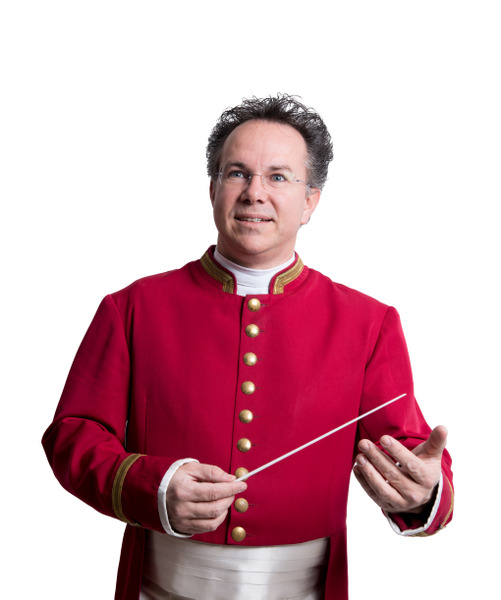 The Strauss Dynasty, including father Johann I and sons Johann II, Eduard and Josef, toured the world with their Strauss Capelle Vienna, heralding a new Golden Age of the Viennese Waltz and enchanting international audiences with breathtaking performances of the contemporary masterpieces of their day.

Today, the Strauss Capelle Vienna musicians preserve their position as “Musical Ambassadors of Austria”, with a mission to proudly represent the city’s rich cultural heritage and emphasize its crucial role as the world’s capital of classical music. As one of the most original cultural exporters of central European arts and culture, the ensemble strengthens political and economic relations between Austria and other countries. 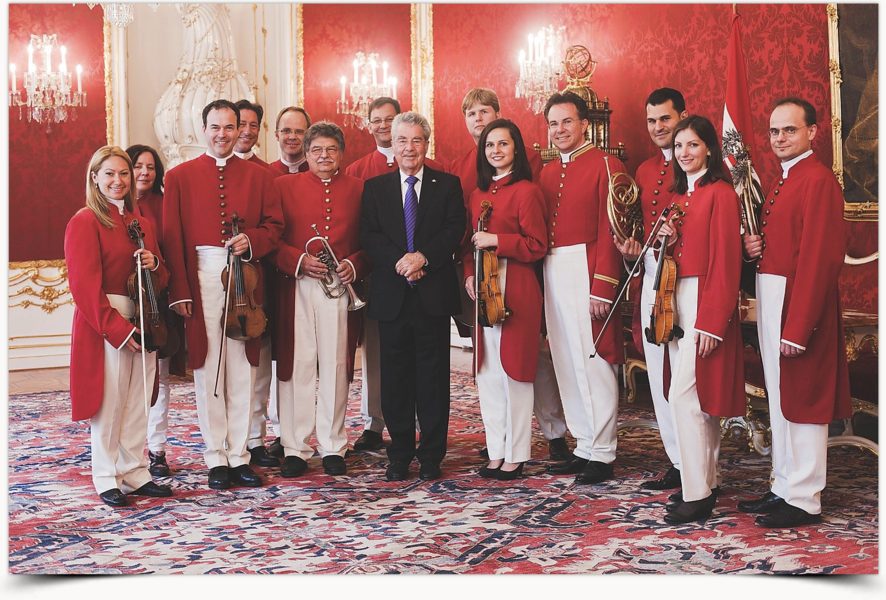